For today, we cannot but mourn..

At these historically difficult times for Greece, there is little that can be said to alleviate the grief and pain for the strike against the civilized world in the heart of historic Europe. For all those passengers in life who have passed through Greece once or a few times in their lives and felt the warmth and the blessed-by-God earth and sea of the aegean, words have no meaning. The light of truth is everywhere, between the passenger and Him. Who has not spoken with Him under the sun of the Aegean? As a ritual, each traveler has been allowed this moment.
Such is the warmth of Greece. The calm depth of simplicity, warms the heart, and happiness, comedy and tragedy become one. Such beauty makes engages everyone. Indeed even the gods of Olympus were permeable receptors of such passion, weakness and the humble beauty of humanity. We are not gods, we are human yet with many flaws. We, the Greeks (or Hellenes) understand the essence of freedom and civilization and we have been credited for this. Indeed we envisaged 'Europa' in our myths as an artiste persuaded and subdued by the tempting reincarnation of Zeus as a Bull. This was the true Greek myth. This is what makes us Hellenes. As Alexander the Great advocated, taught by Aristotle, 'He who is a Hellene is not so by birth right but by choice - as every man is free have Hellenic thought'.
Greece has been humiliated but it is not finished. It is too wise to forget, and it has struggled too much in the past to give up. Greece is NOT hopeless because it is a country rich in history, and having history is having wisdom and belonging. Wisdom is to learn from one's mistakes and to set the example for those mistakes of others. Those who carry a little of Greece in their hearts or in their memories must always find room to smile.. for the sun is still shining on us.
For today however, we cannot but mourn. 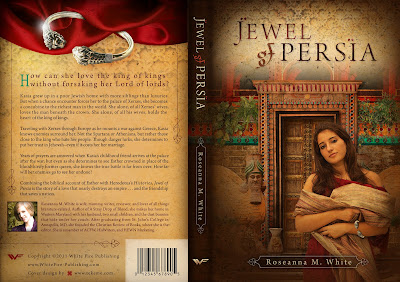 It was around six months ago, when I received an unusual email request sent a satisfied customer.. nothing unusual so far except that this particular customer was Roseanna M. White the author, who was particularly keen on gaining permission to use one of our family's very old jewelry designs for the illustrative cover of her new book The Jewel of Persia
I was very flattered indeed that our Large silver torc bracelet, an all time classic which my uncle Lefteris Vaphiadis last adapted in the 1960's had been selected to perceptively enhance with its presence, a thrilling new book written by an already successful author.

I was also pleasantly surprised that the integrity of the author was such that she did go to the effort of requesting proper permission acknowledging the bracelets copyright (instead of grabbing some images from Google the easy way). Despite what the proper legal route to such endeavors may be, as an artist myself that makes original jewelry designs, I can only congratulate her on this behavior. This behavior being commendable, subsequently has a lot to say about the way the author treats and respects her historic research which is beautifully blended into her novels.
As one reader/reviewer has written already: "I love how Roseanna intertwines history with fiction is such a way it is hard to tell where the truth ends and fiction begins. She has lots of historical information listed on her website to help you see how she wove her story around those facts. She is very clear on what she created and what is factual. It is done so beautifully that it is easy to see how it could have happened."
To be honest, as the book has only just been launched, I have not had a chance to read it yet as my copy is on its way directly from the author (I am very excited!!) , but judging by the book reviews on amazon the novel is already a great hit!
Posted by Aris at 6:38 AM 6 comments:

I just realized that what I tried to describe as the beautiful feeling of spring in Greece (in my last post), has already been said, more poetically, more eloquently and at least 40 years in advance by the brilliant composer Hatzidakis..
Posted by Aris at 5:35 AM 2 comments: 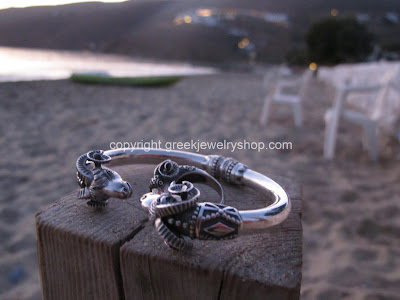 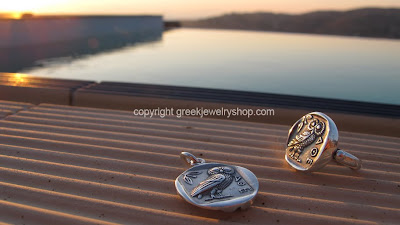 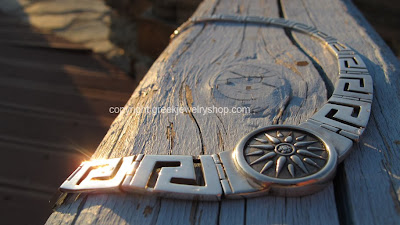 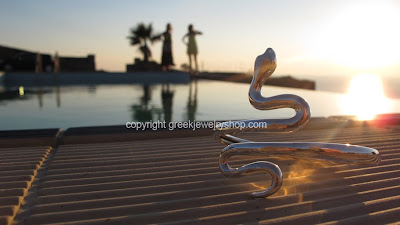 Its not too long ago that these shots were lent to us to photograph from the extensive ancient greek jewelry collection of greek jewelry shop.
The view of them on sandy beaches and on the poolside brings a sigh.. even to me, the photographer.
Why is it that Greece and the Mediterranean is so incredibly blessed in the summertime.. Longing for the Spring and Summer-time. The smell of dryness and hint of herbs in the air... the anxiety and longing in the atmosphere to finish work and enjoy the rest of the day - while the day lasts long into the night.
In Greece you know it has finally arrived when you have that warmth in the air in the late evenings and through the sound of children playing in the 'plateias' (squares) at 8 or 9 o'clock in the evening. No one is in the mood to sleep or let the summer slip away.. yet it always does and now is the time to start looking forward to that tingling feeling of summer again
Posted by Aris at 7:28 AM 6 comments: